We’re in the process of some life-changes in the Paul household.  Read: I’m studying for my insurance license exam until I can get back to school.  Because of this, household chores are being re-delegated according to age, capability, and efficiency level.  My boys have done piddly chores here and there, but nothing chore chart worthy since I’ve been a stay-at-home-mom for so long.  I mean, hell — I get most everything done during the day (or week), so by the time they come home, tasks are slim pickins.  Don’t get me wrong — they’ve been exposed to yard work, laundry, and garbage detail; slackin’ is not allowed here!  But now that we’re looking at life and schedule changes, more daily chores added are pretty much a must.  I’m not staying up until midnight only to get up at 5AM every freaking day of my life. 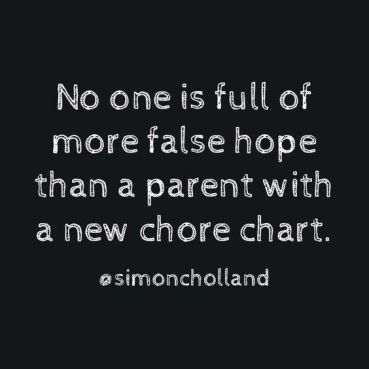 I’ve looked at lists on Pinterest of “age appropriate” chores for the boys and have modified accordingly.  Adjustments will likely still be made, but baby steps are the best steps in figuring out who is best at what and who can stand some improvement in other tasks.

One chore that both boys have been assigned is folding, putting away, and sorting their own laundry.  This is one chore that neither of them mind doing as it allows them some TV time — provided they stay on task and get the job done quickly and neatly.  This has gone off without a hitch…. mostly.  As with most things, there is one flaw that, by God, I’ll have hammered out by the time I’m employed.  Both Gabe and Connor have a SUPER annoying habit of showing off their (lack) of basketball skills by throwing their socks and underwear in the general direction of the washer.  Only their socks and underwear, and only in the general direction.

I don’t know if y’all know this but… I’m a big girl.  I’m also thirty going on one hundred.  My appliance climbing days are DEFINITELY behind me. But, since I’d prefer to not continuously repair or re-buy equipment attachments or hoses, I’m the one climbing behind the washer and/or dryer to retrieve the wayward foot and butt covers.  This wouldn’t be an issue if it weren’t happening daily or if they weren’t running out of undergarments.  Really, I guess “issue” is the wrong word.  Nuisance, perhaps?  Because it isn’t the end of the world, obviously — just a pain in the ass.  Nevertheless, two straight weeks of me crawling my mom hips and carb-loving arse over and behind the washing machine has left me desperate for a solution.

I thought and thought about how I could get their attention that would get the message across loud and clear but without going full Ozzy Osbourne Crazy Train.  I considered making them do jumping jacks every time they missed the desired target, but they enjoy exercising and the goal, here, is for them to put aside their Kobe Bryant tendencies — not encourage them. 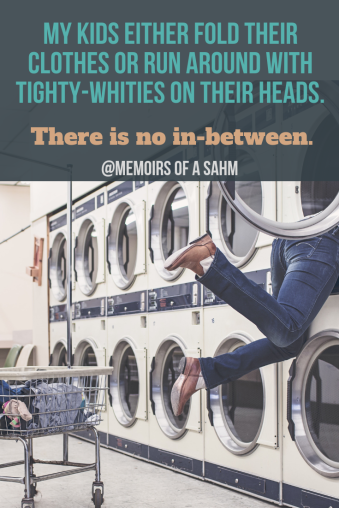 I thought about acting like I was stuck between the wall and dryer, but I am 99.9% certain they’d take advantage of that situation.

And then one day it hit me.  CANTEEN MONEY.  Canteen cash is like gold around these here parts and I’m not above making a dollar for a large Diet Coke, no ice, from McDonalds (a dolla ten, y’all!).  I only ever give each of them a dollar for canteen anyway, so this works out perfectly.  Monday through Thursday they have an opportunity to keep their canteen money.  Every time I have to hoist myself to the back of the washer/dryer, they lose a quarter.  They’re fast learners, so each had seventy-five cents to take to canteen this past Friday.

I’m not above taking candy from my kids, guys. This is especially true if it means I won’t get stuck in a place tighter than pleather leggings from the clearance rack at WalMart.  But I digress.

Other than our battle with “The Case of the Missing Skivvies”, chore completion and delegation is going pretty smoothly.  I’ll admit, I was planning for the worst.  Both boys like to help, but as with any new strategy, things get bad before they get better.  Luckily, there have been little-to-no hiccups and I’ve only had to issue threats of death a handful of times.  My night-caps have drastically decreased in volume and we’re making it to bed by 10:00 instead of 10:30 (BABY STEPS).  Also, my voice is slowly coming back from all of the Death Metal-esque yelling that took place ALL OF LAST WEEK.  Side eye to you, Eureka Math.